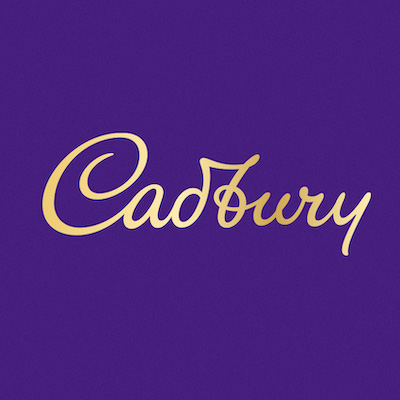 Owner of the brand:
Mondelēz International, Inc.; The Hershey Company (the US)

Cadbury, an iconic British brand with heritage dating back to 1824, is currently owned by two American companies: Mondelēz International, everywhere in the world except for the US, and the Hershey Company, in the US. The Hershey Company bought the rights to produce and sell Cadbury-branded products in the US in 1988. It paid $300 million[1] for the US candy operations which then belonged to Cadbury Schweppes (now a non-existent entity), a price which by some (mostly British) publications is believed to be low[2]. Mondelēz and Hershey use different product formulas, so the Cadbury chocolate tastes differently in the UK and the US—reportedly, it is sweeter, a bit darker and has a different, more “melt-resistant” texture in the US[3].

Until 2018, the Cadbury’s positioning was defined as “providing moments of joy”. It was executed by means of a few communications platforms, from the campaign “A glass and a half full of joy” (known primarily from the famous 2007 Cadbury ad with a gorilla playing the drums[4]), through a more product-oriented “Joyville”[5] (Joyville representing a magical place where Cadbury Dairy Milk is made[6]), to “Free the joy”, focusing on spontaneous moments of joy in more everyday situations and “Tastes like this feels”, highlighting the message that “joy is never far away”[7].

In 2018, Cadbury announced a new brand strategy, which for the first time in more than a decade does not revolve around the moments of joy. The new positioning focuses on “genuine acts of kindness and generosity”[8] and was launched with the “Mum’s Birthday” campaign[9]. The main reason why Cadbury has changed its approach is that the company felt the brand “was losing touch with the fabric of the nation”[10]. Cadbury executives wanted the brand to be “more human, more real and relatable”[11] and decided to build a stronger connection between its positioning and the company’s roots. Cadbury originally was a family business run by a philanthropist, John Cadbury, known for his generosity and kindness. Ben Wicks, Cadbury’s Global Brand Director commented to Campaign: “We see the opportunity as what happens between people – the small acts. What we want to do is shine a light on those moments, the little moments, and do that in a way that’s heartwarming and brings a smile.“[12]

Cadbury never acts as a standalone brand; there are no products called just “Cadbury”. Cadbury is an umbrella brand stretching over a range of sub-brands and endorsed brands. Some of these are very close to the main brand, e.g., the flagship Cadbury product, Cadbury Diary Milk, the positioning of which is identical to that of the umbrella brand. Some have distinct identities, as is the case for the Burnsville or Fry’s lines of products, which do not even use the famous Cadbury purple in their branding.

Until 2018 Cadbury was positioned as a Jester brand, providing moments of joy. The elements of this positioning are still present in the Cadbury’s brand equity. The new brand strategy is based on the Caregiver archetype, as it revolves around generosity and kindness.

“There’s a glass & a half in everyone”

“Cadbury was founded in 1824 when John Cadbury opened a grocer’s shop at 93 Bull Street, Birmingham, England. Among other things, he sold cocoa and drinking chocolate, which he prepared himself using a pestle and mortar. Now, the brand offers a host of delicious chocolates and drinks, including the Cadbury Egg, Cadbury Dairy Milk chocolates, Flake, Wispa, Twirl and Eclairs chocolates, and Cadbury Bourneville drinking chocolate.”[13]

Cadbury trademarked its signature purple colour (Pantone 2685c) in 2004, but lost the trademark in 2013, when Nestlé won a court case in which it argued that the Cadbury’s trademark application lacked clarity.[15]

1. The Drum on Cadbury’s response to the anti-Cadbury Crème Egg ad petition
C. Kenna, “The Response To Cadbury’s Crème Egg ‘Gay Kiss’ Ad Petition Is A Sign Of Progress”,  The Drum, Feb 2021,
https://www.thedrum.com/opinion/2021/02/24/the-response-cadbury-s-cr-me-egg-gay-kiss-ad-petition-sign-progress

3. Quartz on how Cadbury lost the rights to sell its products in the US
S. K. Narula, “How Cadbury Lost The Right To Sell Its Own Chocolate In The US”, Quartz, Feb 2015,
https://qz.com/334333/how-cadbury-lost-the-right-to-sell-its-own-chocolate-in-the-us/

What do you think?

If you're interested in hearing​ how we're doing​​, what progress we have made​ or ​which brands and categories we have added, just leave your email.

We promise we will not send you more than one email per week.

This website uses cookies to improve your experience. We'll assume you're ok with this, but you can opt-out if you wish.Accept Read More